Millennials stand out for their technology use, but older generations also embrace digital life

Millennials have often led older Americans in their adoption and use of technology, and this largely holds true today. But there has also been significant growth in tech adoption in recent years among older generations – particularly Gen Xers and Baby Boomers.

More than nine-in-ten Millennials (92%) own smartphones, compared with 85% of Gen Xers (those who turn ages 38 to 53 this year), 67% of Baby Boomers (ages 54 to 72) and 30% of the Silent Generation (ages 73 to 90), according to a new analysis of Pew Research Center data. Similarly, the vast majority of Millennials (85%) say they use social media. For instance, significantly larger shares of Millennials have adopted relatively new platforms such as Instagram (52%) and Snapchat (47%) than older generations have. 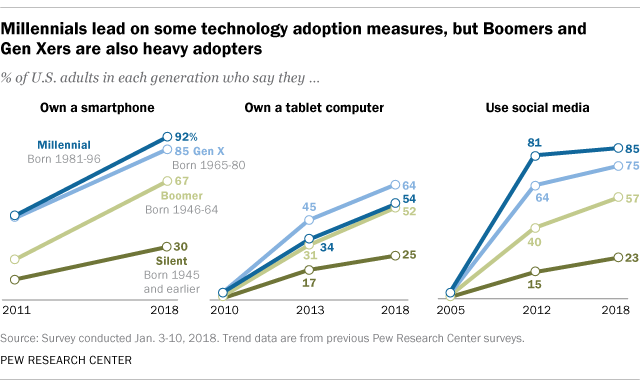 This analysis reflects the Center’s recent decision to establish 1996 as the final birth year of Millennials, marking that generation as those who turn ages 22 to 37 this year. (Those born in 1997 or later are post-Millennials.) 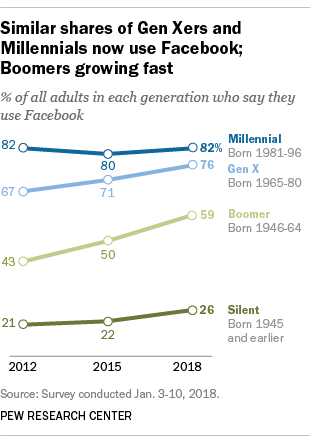 And while the share of social media users among Millennials has remained largely unchanged since 2012, the proportion of Gen Xers who use social media has risen by 11 percentage points during this time period. As a result, comparable shares of Gen Xers and Millennials now report using Facebook (76% and 82%, respectively).

Baby Boomers continue to trail both Gen Xers and Millennials on most measures of technology adoption, but adoption rates for this group have been growing rapidly in recent years. Boomers are now far more likely to own a smartphone than they were in 2011 (67% now versus 25% then). Further, roughly half (52%) of Boomers now say they own a tablet computer, and a majority (57%) now use social media.

Although Boomers have been enthusiastically adopting a range of technologies in recent years, members of the Silent Generation are less likely to have done so. Three-in-ten Silents (30%) report owning a smartphone, and fewer (25%) indicate that they have a tablet computer or use social media (23%). Previous Pew Research Center surveys have found that the oldest adults face some unique barriers to adopting new technologies – from a lack of confidence in using new technologies, to physical challenges manipulating various devices.

In addition to these differences in their use of various technologies, Americans across generations also differ in their overall views of the broad impact of the internet.

Regardless of generation, the vast majority of those who go online think the internet has been good for them personally. But younger internet users are more likely than older Americans who use internet to say the internet has had a positive impact on society: 73% of online Millennials believe that internet has been mostly a good thing for society, compared with 63% of users in the Silent Generation.

At the same time, Americans today are less positive about the societal impact of the internet than they were four years ago. Gen Xers’ views of the internet’s impact on society declined the most in that time. In 2014, 80% of Gen X internet users believed the internet had been mostly a positive thing for society, a number that dropped to 69% this year. Millennial and Silent online goers are also somewhat less optimistic than in 2014.

The new analysis also finds that almost all Millennials (97%) say they use the internet, and 28% of them are smartphone-only internet users. That is, they own a smartphone but do not have traditional broadband service at home. A similarly high share of Gen Xers (96%) also use the internet, as do 83% of Boomers, but just 52% of Silents. When it comes to smartphone-only internet users, 18% of Gen Xers go online primarily via a smartphone, as do 13% of Boomers and 8% of Silents.

The Future Of CX

6 Trends Transforming Manufacturing in the US