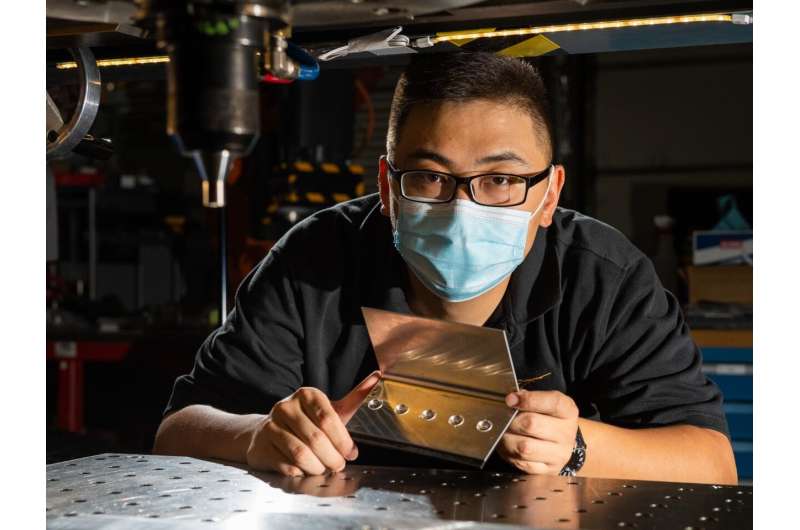 Magnesium is one of the lightest metals—making it ideal for better fuel economy in vehicles. But it trails behind aluminum and steel in industrial use because it’s sometimes brittle and difficult to shape into structural parts. The new friction-based riveting technology, called Rotating Hammer Riveting (RHR), avoids the need to pre-heat the metal to form the rivet and improves the fastening joint. It also works on aluminum rivets, which are used in airplane construction. The processing method is also significantly faster, which can save time and money in airplane and vehicle construction.

Riveting is one of the oldest known techniques for joining different materials. The ancient Egyptians used wooden rivets to join metal handles to clay jars. Riveting then passed down through ages and across civilizations and can be seen in Roman structures, Viking ships, Medieval armor, and other historical items.

With the advent of new materials in the 19th and 20th centuries, steel riveting became ubiquitous across a massive array of structural applications ranging from buildings to bridges and battleships to airplanes. But the riveting process remained virtually unchanged. Take a cylindrical piece of metal with a mushroom shaped cap on one end, slip the shank or stem through holes in the two materials you want to join, then beat on one end of the shank with a hammer to form a second head that clinches the two materials together.

Try to do that with a magnesium rivet and it would probably shatter. While a magnesium alloy has high strength for its light weight, magnesium tends to be brittle at room temperature. So typically, magnesium alloy rivets are heated to get them soft enough to hammer and bend without breaking.

Heating each rivet is slow and expensive, so magnesium rivets are rarely used although they are 30% lighter than the aluminum rivets that are used to join magnesium sheet metal.

The RHR technology, developed by PNNL, does not require pre-heating the magnesium rivets. The process, described in the Journal of Magnesium and Alloys, uses magnesium rivets without pre-heating. And it does so four to 12 times faster, while also eliminating the time it takes to pre-heat rivets in conventional impact riveting and delivering added benefits of enhanced strength and corrosion prevention properties.

RHR is an offshoot of friction stir welding. The technique uses a small rotating tool, called a hammer. The rotational force generates heat via friction and deformation, which softens the magnesium enough to form the rivet head while also mixing the underside of the rivet’s head to metallurgically bond with the underlying metal sheet. This merging of metals forms a continuous bond that wards off corrosion.

“It took many attempts to find the right balance between the rotational speed of the hammer and the speed at which we plunged it into the rivet,” said lead researcher Tianhao Wang. “But we ultimately found a sweet spot in the processing range where the rivet head did not adhere to the tool, nor crack during the RHR process.”

The newly patented process deforms the metal such that its crystalline structure is altered. Using high-powered microscopes, researchers were able to see how the grains were refined and reoriented to make the magnesium more formable and stronger.

Corresponding author Scott Whalen notes that RHR works on aluminum rivets as well, like those used in aircraft. With hundreds of thousands of rivets on every commercial airplane—mostly made from aluminum alloy 2024—Whalen says the process could reduce costs and increase efficiency on the production line.

Rivets made of aluminum alloy 2024 are too strong to rivet if stored at room temperature. So, they must be annealed, or softened, and then stored in a freezer to keep them soft before riveting.

“Once on the production line, these “ice box rivets” must be used in less than 15–30 minutes, otherwise they become too hard to rivet,” said Whalen. “However, RHR can rivet aluminum 2024 rivets after they are in the fully hardened state, so cold storage is not needed. This means rivets would no longer need to be stored in a freezer, riveting is not time sensitive, and unused rivets no longer need to be re-heat treated and re-placed into cold storage.”

RHR processing of aluminum is extremely fast. Conventional riveting takes between 1–3 seconds per rivet, while RHR requires just 0.25 seconds. That time savings could translate into 40 hours saved per 100,000 rivets. “That would mean one full week less spent riveting on just a fraction of one commercial airliner if RHR were adopted,” said Whalen.

RHR is just one of a suite of disruptive manufacturing technologies to process metal alloys and composites being developed by PNNL. These Solid Phase Processing techniques involve deforming materials without melting to heat, mix, fabricate, and join metals and other materials. The resulting materials have extraordinary properties compared to those produced by conventional manufacturing methods.

Industrial Fastening of Macon is Acquired By Bolts & Nuts Corp.