When a sub-assembly supplier to a global car manufacturer needed a new type of fastener they turned to JET PRESS. 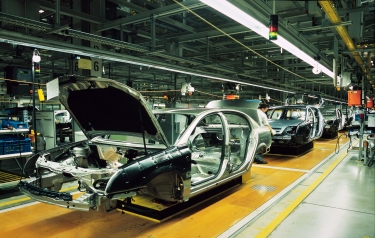 Their outline requirements appeared straight-forward at first: attach fasteners into a sub-assembly so that this sub-assembly then fitted easily, with those fasteners, directly onto the vehicle. However, it soon became clear that due to specific fitting-force, ease-of-use and cost considerations, there was nothing in the range of standard fasteners from JET PRESS that would quite fit the bill; instead the technical team designed a bespoke product.

Each fastener needed to be held securely in the panel hole of the sub-assembly during transport to the vehicle assembly plant. The sub-assembly, complete with the fasteners attached, would then be positioned to the underside of the vehicle where the final fitting needed to be quick and easy. One-hand operation of the fixing was required with no more than 30N of force to secure the fastener in place. Once in place the fastener had to withstand forces of at least 200N, at a temperature that would at times reach as high as 130°C.

Martin Belcher, JET PRESS Technical Manager explains, the specifications were quite precise and for the volumes involved, JET PRESS were able to create an entirely original design. Other two-stage rivet fasteners generally have to be pre-assembled from two components and this significantly adds to their in-place cost. This solution was a singly-moulded drive rivet with a double-detent positioning feature. It is manufactured from impact-modified, heat-stabilised material that gives rigidity and temperature stability in excess of the specification.

Another design consideration resulted in a recess under the head of the fastener’s drive-pin and this facilitates the release of the fixing using a screwdriver; this is important for maintenance and for recycling at the end of the vehicle’s life.

The fastener is first fitted on the bench at the sub-assembly manufacturer’s plant. The rivet is placed in the hole of the sub-assembly and the drive pin is pushed to the first stop position. This breaks the moulding seal between the rivet body and pin, and holds the fastener securely in the sub-assembly. The first detent positioning device prevents the pin from accidentally being driven fully into its final position during transport.

On the vehicle, the sub-assembly can be held in place with one hand. The operator then simply uses their free hand to drive the pin fully home in the rivet where the second detent positioning device holds the pin in place. This final push locks the pin in the closed position and prevents it from coming loose due to gravity or vibration forces.